How To Qualify For Medicaid In Utah

How Does One Qualify For Medicaid

Learn About Chip In Utah

The Utah Childrens Health Insurance Program is a program that is the result of a partnership between the federal and state governments to ensure that Utahs children have the health care they need. CHIP in UT is available to families with children younger than 19 years of age who meet certain income requirements. The question Is CHIP considered Medicaid? frequently arises when Utah residents are researching ways to cover the costs of their childrens healthcare needs. CHIP and Medicaid enrollment, while offering similar services, are part of two separate programs. The sections below provides information on the differences between the CHIP and Medicaid programs, as well as details on CHIP eligibility requirements and the services this program covers.

Information About the Utah CHIP Program

Is CHIP considered Medicaid in Utah?

Learn About CHIP Requirements in Utah

If you do not qualify for Utah Medicaid eligibility children in your household may still be eligible to receive low-cost health insurance coverage through Utah CHIP. To qualify for CHIP benefits, children must be younger than 19 years of age. For successful CHIP enrollment, children must also be United States citizens or legal residents and not have existing health insurance coverage. A childs preexisting medical conditions do not affect the childs eligibility for CHIP. Keep in mind that if a household is eligible for CHIP in UT, all children are covered within that household.

How to Apply for CHIP in Utah

Learn About Medicaid In Utah

Utah Medicaid is a health coverage program that enables vulnerable residents to access quality health care. The Utah Medicaid program is run by both the state and the federal government. The program allows eligible people to get various health services for free or at a low cost. Utah Medicaid eligibility varies depending on the applicant. Generally, applicants need to meet specific special requirements, income requirements and citizenship requirements.

Utah Medicaid eligibility is determined by the state and can be revised at any time. The application process is easy and fast. You can apply on your own or get someone else to help you. Check our Utah Medicaid application section for the various ways in which you can apply for the program.

This is not a complete list. The benefit information is a brief summary, not a complete description of benefits. For more information contact the plan or read the Member Handbook. Limitations, copays and restrictions may apply. For more information, call UnitedHealthcare Connected® Member Services or read the UnitedHealthcare Connected® Member Handbook. Benefits, List of Covered Drugs, pharmacy and provider networks and/or copayments may change from time to time throughout the year and on January 1 of each year.

You can call Member Services and ask us to make a note in our system that you would like materials in Spanish, large print, braille, or audio now and in the future.

Language Line is available for all in-network providers. 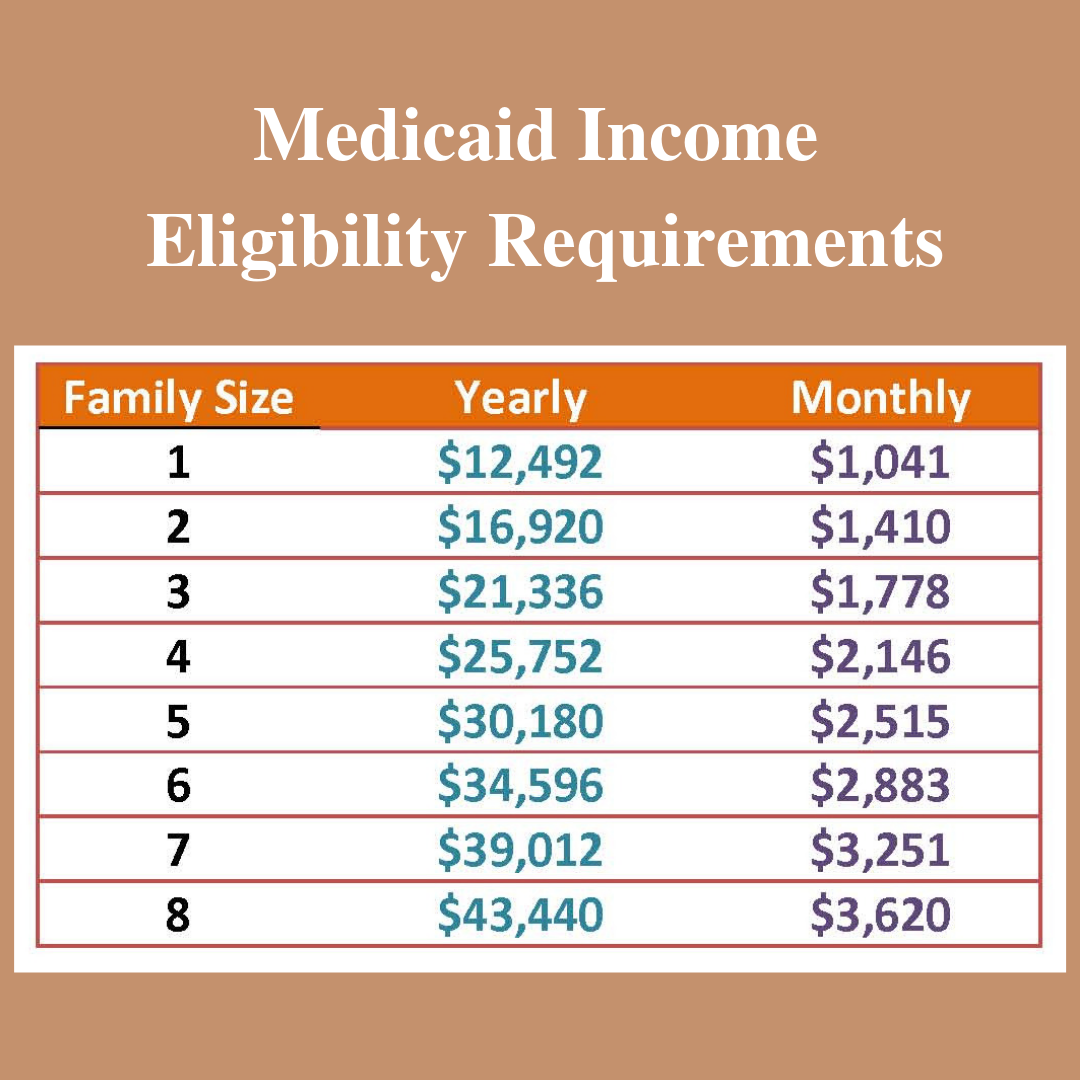 The Utah Medicaid Income Limit is calculated as a percentage of the Federal Poverty Line.

To qualify, you must meet the Utah Medicaid Income limits listed below.

Don’t Miss: How Much Can You Make And Still Receive Medicaid

For persons with limited financial resources, Medicaid pays for nursing home care. For those who wish to live at home or in assisted living, sometimes Medicaid will pay for care in those locations if it can be obtained at a lower cost than in a nursing home. It does this through state-specific Medicaid Waivers, which are also called Home and Community Based Services Waivers or Waiver Funded Services.

Which Residents Meet The Requirements For Utah Medicaid

What are the Medicaid application guidelines in Utah when it comes to applying for government-funded health care coverage? Medicaid eligibility requirements in Utah include certain residential, income and medical factors. Each Utah Medicaid benefits eligibility group has different qualifications.

Who is eligible for Medicaid in Utah according to these application guidelines? Applicants must be residents of the state of Utah. Requirements for Medicaid include the applicant being a citizen of the United States, a legal alien or permanent resident of the U.S. A birth certificate, drivers license or other legal form of identification can prove eligibility. Immigration paperwork is necessary if the applicant is not a citizen of the United States. Without proper identification, the state will deny the applicant.

All participants must have a low income to qualify and be in need of healthcare coverage. The Childrens Health Insurance Program is for children younger than 18 years of age and from low-income households in need of health insurance coverage. CHIP benefits include preventative doctor visits, sick visits, emergency care, vaccines, x-rays, lab tests, vision and hearing coverage. Parents or caregivers of children with Medicaid coverage can also apply for benefits. Low-income pregnant women also qualify for Medicaid benefits.

What Are The Income Requirements For Medicaid In Utah

What are the requirements for Medicaid in Utah when determining a financial need? Utah Medicaid eligibility requirements are dependent upon the size of the applicants household. Discover who is eligible for Medicaid based on the number of family members and household earnings.

Households containing more than eight people can add an additional $5,533 for each additional individual. Income requirements are the pre-taxed earnings of a household. Petitioners must have household incomes within the Medicaid threshold to receive health benefits. If household incomes do not fall within the Medicaid requirements, the individual or family must apply for health coverage through employment or the private marketplace.

Its worth noting that its cheaper for the federal government to cover the population with income between 100% and 138% of the poverty level under Medicaid than to pay for premium subsidies. But its cheaper for the state to have that population covered by private plans in the exchange, with federal subsidies, since the state pays nothing at all for that option. If that population is covered under Medicaid, the state would be responsible for 10 of the cost.

Medicaid was partially expanded in Utah as of April 2019. But under the terms of a new waiver that CMS approved in December 2019, the state fully expanded Medicaid as of January 2020 albeit with a work requirement, as described below .

As of May 2021, there were more than 60,000 low-income adults covered under Utahs Medicaid expansion program.

How Do I Qualify For Pregnancy Medicaid In Utah

You May Like: How To Get Both Medicare And Medicaid

But about 45,000 more people would have been eligible for Medicaid if the state had implemented the Medicaid expansion ballot initiative . Instead, these individuals continued to be eligible for substantial premium subsidies and cost-sharing subsidies in the exchange in 2019 .

Utahs 2018 waiver proposal based on H.B.472 and mostly approved by CMS in March 2019 requested enhanced federal funding for Utahs limited Medicaid expansion proposal . Although CMS granted temporary approval for Utah to expand Medicaid to adults earning up to the poverty level and impose a work requirement as of 2020, CMS clarified that the state would only receive its regular federal funding match, which is about 68%.

How Many People Are On Medicaid 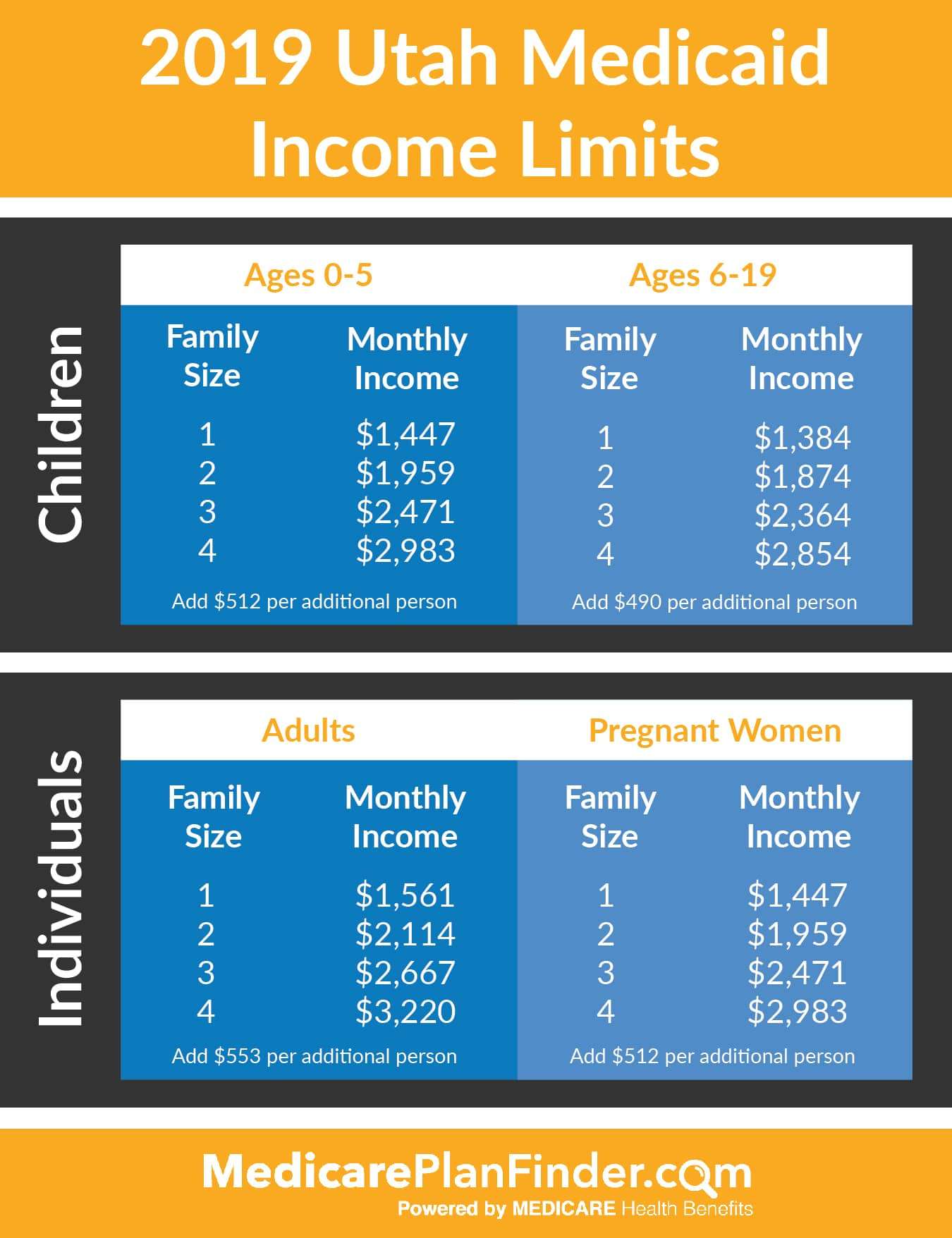 According to the Centers for Medicare & Medicaid Services, as of November 2020, here are the number of people enrolled in Medicaid and Chip in the entire United States:

Enrollment Dropped From 2016 To 2019 But Increased Again Under Expansion

From 2013 to July 2016, total enrollment in Utahs Medicaid/CHIP program increased by 4% , but by March 2019, enrollment was about 3% lower than it had been in 2013. This was despite an increased eligibility limit for low-income parents, and the limited expansion of Medicaid for homeless people with no income, which took effect in November 2017.

But enrollment in Utahs Medicaid program is growing rapidly now that coverage has been expanded to adults with income under the poverty level. As of early 2021, it was 36% higher than it had been in 2013.

Who Can Get Medicaid In Utah

You May Like: Does Ira Count As Income For Medicaid

How To Apply For Medicaid

Enter your zip code to get started.

Medicaid in Utah is specifically designed in a way to benefit every deserving citizen. There is a huge list of programs that are available for the Utah citizens. The State is also trying to entertain the citizens who have some certain medical condition, and their income is above the set limit. This is called ‘Spenddown Program‘ in which members have to pay the exceeding amount of their income to the State every month, and they will be enrolled. Also, there is a bundle of programs available for children, pregnant women, people with certain disabilities and senior citizens. You can click here to read the Program section of the official website.

Learn How To Apply For Medicaid In Utah

UPDATE: In 2020, the rules and steps related to applying for Medicaid are expected to remain the same.

Where do you sign up for Medicaid in Utah? Finding out where to apply for Medicaid in Utah is the first step for applying for health care coverage. The Utah Medicaid application process ensures Utahs most at-risk and low-income populations can access health insurance on an as-needed basis.

The Utah Medicaid application form to request benefits is available to pregnant women, the blind, disabled and applicants older than 65 years of age. The Department of Workforce Services processes all UT Medicaid applications and uses an online system to verify eligibility and income. Each applicant is assigned a caseworker that can help answer questions regarding applications, eligibility, coverage details and the length of ones coverage.

To find out how to apply for Medicaid in Utah, review the details provided in the sections below:

How To Apply / Learn More

State social workers prioritize individuals who currently reside in a state licensed nursing home or medical facility. For those who are interested in this program and do not currently live in a skilled nursing center, they must apply during three, 2-week, open enrollment periods starting on March 1, July 1, and November 1.

As this program is designed for persons already receiving Medicaid services and residing in nursing homes, interested parties should contact their nursing home or Medicaid administrators with questions regarding processes and availability. One can request application forms and instructions by dialing 662-9651, and selecting number 6.

The New Choices Medicaid Waiver is operated by the Utah Division of Medicaid and Health Financing. For additional information about this program, .

If youre a U.S. resident, you may still be able to get help with your emergency medical bills through Medicaid. To do this, youll need approval within 90 days of the medical expense. Since the approval process can take 45 to 90 days, that means youll need to submit your application as soon as possible.

Even if youre approved for Medicaid moving forward, you wont necessarily see your emergency visit expenses covered. Medicaid looks at whether you would have been approved for coverage at the time of the incident to make that determination. If, for instance, your income dropped significantly after the emergency room visit, Medicaid may approve your application but deny retroactive assistance.

Can A Father Apply For Medicaid

Can A Father Apply For Medicaid